There are some activities that seem like they always could be improved. One is creating an authoring environment where professional technical communicators and other staff can work together; the other is setting up the best lighting for training videos.

This is especially true for videos where chroma-key will be used to remove and replace what was behind the person being videoed. The type of background designed to be easy to be removed from a video is known as “green screen”, although sometimes the colour can actually be a shade of blue.

In the past, we’ve used a green screen cloth on a frame, which has worked fairly well. However, it was bulky. We’d either have to dismantle it and the reassemble it for each recording, or live with office space being taken up by the frame and cloth.

There also always seemed to be a few wrinkles in the cloth that resulted in a green halo around the presenter. Photographers call this “spill”, and it’s caused by light bouncing off the green screen on to the presenter. Many professional video software applications have a feature called spill suppression, but it’s best not to have to use it in the first place.

In the end, we decided to take a different approach and paint one of the office walls. Using a special latex green screen paint from Germany, we painted a large green rectangle. Here is a photo taken after the first two coats of paint:

It took quite a few coats to get an even colour, but it has made recording videos a lot easier, and it’s given us back some office space.

It’s reduced the amount of green fringing around the presenter, but there is still a little of that if someone looks closely. We may never be able to get rid of it completely, unless we carry out post-processing spill suppression. However, we believe we can make some improvement by changing the bulbs in the kicker lights.

This image from Virtualsetworks.com shows where the kicker light should be placed: 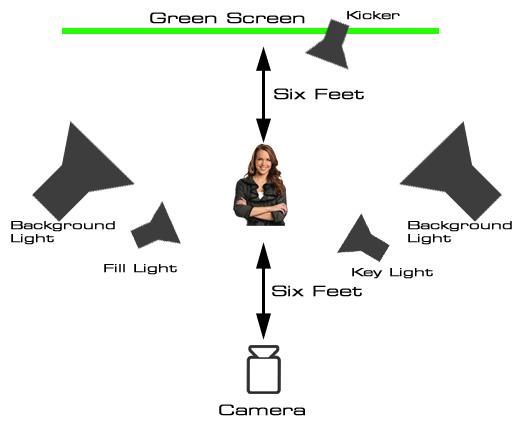 You can never have too many lights.

Hopefully, we’ll come up with even more improvements, and report on those in the future.

Vlogging – the next stage in technical communication