I decided to try out London’s Barclays Cycle Hire, known colloqually as “Boris bikes”, yesterday. There are 6,000 bicycles distributed across central London that you can hire on an ad-hoc basis.

While the scheme is a great concept, for the casual user it lacks something – information on using the bikes! Where user information is provided (on the Transport for London web site and on the payment ticket, for example), it’s pretty good: 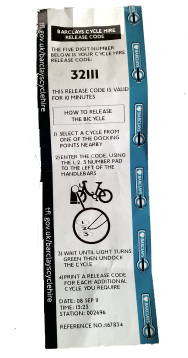 However, I couldn’t find any information on how to book and return a bike on the docking station terminals themselves. The terminals are where the casual user pays for the hiring of a bike and receives the code for releasing a bike from its clamp:

A little bit of information at the docking station terminal itself would, I’m sure, encourage even more people to use this valuable and worthy service.

What about ‘How to adjust the saddle height’. I that documented?

I think it is.

Voltaire, typos, and the jitters – writing the IBM Style Guide